Drury has been developing tea, coffee and hot chocolate for a number of years. Commercial director Marco Olmi says: “We started off with our pyramid teabags which is a high-quality leaf tea in a bag. You have the quality of tea from a teapot with the convenience of a tea bag.”

Factors about the design, structure and shape of the pyramid bags differentiate them from conventional tea bags and give rise to the difference in taste and flavour, he says.

Because of the way the system works owing to the shape of the pyramid bag, the fact that it is not paper but a mesh, these differentiators are what give the tea a highly satisfying taste akin to a freshly brewed pot of fine quality tea, he says. “This ability to serve high quality tea in a bag means that we can experiment, we can use large leaf teas, and we can get really interesting and good teas into a pyramid bag,” he tells Luxury Bed & Breakfast magazine.

“Most people want a good cup of breakfast tea, and 90% of the tea we have produced using pyramids is breakfast tea. That’s what both the British and visitors to Britain want. What we produce with the pyramid tea bag is a really good quality British tea, you do taste the difference – it’s astounding,” he stresses.

Since launching the pyramid tea bag Drury has received highly positive feedback, he says. “The company developed the product and achieved modest success with it to begin with. There were a few central London hotels where the teas were featured both in the restaurants and then in the rooms, where they received very good feedback,” he adds. 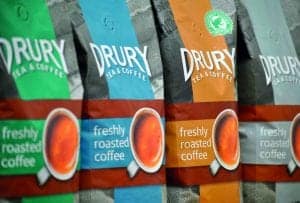 In recent years, as luxury B&B owners have been crafting a finer guestroom experience for their visitors, they have increasingly been investing in high quality coffee machines for the bedrooms (see Luxury Bed & Breakfast December 2018). It is becoming more and more common to find a Nespresso machine among the facilities on offer in the bedroom today.

However, Marco says that such machines are an expensive investment, so they are not a universal facility by any means. And he says: “If you don’t supply such a coffee machine then it is hard to provide good quality coffee for your guest bedrooms.”

Meanwhile, he says, guest house and hotel owners were placing everyday coffee sachets next to high quality pyramid tea bags. He says: “This is fine, but even though there is good instant coffee available out there, it is still never going to be as good as real coffee.”

It is this idea that led Drury Coffee to think about what it could do to address this and produce a good in-room coffee to match the standard set by their revolutionary teas. He says while a solution in the form of a bedroom coffee machine ticked the box, there are problems that can make it impractical. He says: “I know there are some excellent luxury B&Bs I have stayed in over the years whose owners have tried to offer cafetières, but they can be problematic. There are many issues not least including dosage. They are messy, they pose a danger of scalding the guest, and they are relatively high maintenance.

“That led us to look around the market. We found that there were coffee bags that had been around for years, but that had been just focussed on the retail market. So we proposed developing a higher quality bag to put alongside the pyramids.”

The company thus developed Ground Coffee Bags, the latest addition to its portfolio. “It offers all the taste of ground coffee with none of the mess – simply brew it as you would a teabag,” says Olmi. The coffee bags are available in two blends, a 100% Arabica coffee from Rainforest Alliance Certified farms, and a Swiss Water Process decaffeinated coffee. The stylish packaging features an Art Deco design. 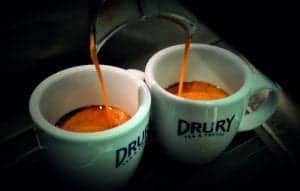 Feedback has been overwhelmingly positive, he says. The company has since developed a size of coffee bag to fit in with the rest of the bedroom hot drinks system, and last month it took the first delivery of the larger-sized sachets. Drury Coffee has also redeveloped its wooden tray to accommodate the larger size. “The products look neat and stylish when displayed on our Drury-branded wooden tray,” says Olmi. These are available for £5 each but they are available free to regular purchasers, he adds.

“It is a proper proper cup of coffee – it is delicious,” he contends. “I travel on business and always take enough sachets with me to last the trip because then I know I am going to have a decent cup of coffee each morning.”

It is early days but already the company is supplying the coffee to a number of high-end B&Bs and a variety of small and medium sized hotels. He says: “At least once a week without fail we have received a phone call from a member of the public who has experienced one of our coffee bags in their room, asking if they can buy it for their home because they want to take it with them when they themselves go away, often stressing you can seldom get a decent cup of coffee in the bedroom hot drinks service of a hotel or guesthouse.

“Sales have subsequently sky-rocketed through our mail order site and our retail shop,” he says, referring to the company’s small retail presence in Covent Garden in London. “There the coffee is simply flying out of the door,” he says. “It proves there is indeed a gap in the market that this very neatly fills,” he adds.

The last piece of the jigsaw to the range is the supply of a decent quality cup of hot chocolate. We don’t manufacture it ourselves but it has relatively high coca solids and good quality, delicious,” says Marco. The result is Luxury Hot Chocolate, an all-in-one hot chocolate mix in a sachet. Juts like the Arabia coffee, the brand’s cocoa is sourced from Rainforest Alliance Certified farms. Marco says: “All you need to do is add hot water for a smooth, rich and decadent taste.” The sachets also follow the Art Deco theming with an Alpine scene.

Marco says: “All three products have come together. If I turned up at a good quality luxury B&B I expect to make myself a nice cup of tea. What I don’t want to see is the cheapest possible generic branded dust-filled bag. But what really bugs me is staying in an expensive luxury hotel as I did recently with a very early start the next morning around 5.30am for £180 a night and wanted a cup of coffee – the cheapest possible instant sticks. I thought that is utterly unacceptable if you are being charged that kind of money.”

At 24 pence per bag Drury Coffee is around three times the cost of the cheapest instant sachet, says Marco, who admits it is not cheap. But he says: “When you are spending more than £100 a night, the quality of coffee in the room can result in the difference between a four and a five star rating. People do notice those little touches,” he stresses.

It’s not just tea and coffee – there are lots of little touches people can do to improve the guest experience but I do think as a nation we like our tea and coffee and feel that simply providing good quality tea and coffee sachets like this can boot the appeal of B&B.

“Espresso coffee machines for each bedroom hot drinks service provide a nice touch, but our coffee bags are so much less expensive and more efficient, cleaner, less time-consuming, tidier, and yield every bit as good a result,” he says.

If the British understand one thing it is the tea bag, he says. “This coffee bag system just makes sense – people know what to do. We put the instructions on it, but people know how to make the cup of coffee. Even I can be confused by the complexities of the way a coffee machine may work. I dread to think how many people have to phone down to reception asking how the coffee machine works. They do make a decent cup of coffee, but they are not without their problems.”

Your Guests Are Our Priority Pledges Linen

We asked Matt Bryant from ZigZag Accounting to update us on the current financial aspects surrounding the Impact of the Coronavirus on the Hospitality Industry. Further links can be found at the bottom of this […]

David Cormack,  Marketing Director of Cormar Carpets shares with us his  advice on how the right care and upkeep not only keeps your carpets looking their best but also extends their lifespan too.   When […]