We caught up with Four in a Bed Winners, Dani and Cameron Mackinnon, owners of Distant Hills Guest House in Spean Bridge, Scotland, to find out what they thought about the filming experience.

NOTE: The opinions expressed by the programme participant in this interview do not reflect the views and opinions of the Four in a Bed production team, Studio Lambert, or any other party involved. These opinions belong solely to the interviewee and are for entertainment purposes only.

How did it feel to win Four in a Bed?

Dani: We were faced with such stiff competition, so we were beyond shocked to win. It reassured us that we do have a quality guest house and offer good value for money. We are so proud to have the winning plaque on show in our hallway and our guests love to chat with us about our time on the show.

What surprised you the most about the experience?

Dani: The length of time spent filming. The amount of time it took to film a certain scene and the length of the days. We would maybe start at 8.30 in the morning and on that very first night of filming I think the cameraman didn’t walk out of our room until at least 12.30 at night. The days are very draining but it was immense fun.

The camera crew were incredible and we were lucky that we were placed with other friendly owners. We were all very supportive of each other. I think that’s quite uncommon, but yeah we were just extremely lucky.

Are you still in touch with any of the other contestants?

Dani: Yes! We’ve become really good friends with John and Shona, who own Larch Green Lodges. We’ve both stayed at each other’s properties and we’re in touch with each other regularly. In fact some of our family members have met as well. It’s really wonderful.

How and why did you decide to apply?

Dani: We were contacted by Studio Lambert by email back in January 2021 asking if we wanted to do it and we were in lockdown at the time. We’d taken over the business in July 2019, so we’d only been here for the last 12 weeks of that season. Then the pandemic hit and we were only able to trade for 12 weeks in 2020. And [when Studio Lambert contacted us] we just thought, well what have we got to lose? With the international market being next to non-existent, we were looking to be even more competitive and we just thought that the increased exposure on tv would really help us through what we felt was a difficult time. We’d always said we would never go on the show because we hate conflict, but having found ourselves in lockdown and that increased competitive situation, we just thought, we really have nothing to lose. It couldn’t get any worse.

Did you enjoy creating the little videos for the applications?

Dani: Yes, that was a real laugh. Cameron and I had lots of fun taking lots of different shots and taking the mickey out of each other. We hated seeing ourselves on screen afterwards in those little clips, but we did have a good laugh.

What top tips or advice would you give to people who might want to apply?

Dani: I would say it’s a massive risk. I think you’ve got to be sure that your business or your property is in as good shape as it possibly can be.

I’d also say watch as many of the Four in a Bed episodes as you possibly can, because the more you watch it, you really begin to learn what camera angles they look for. For example, they always do a close up shot of your doorbell. It’s always the little details like that, so always make sure that the front of your house is immaculate. It’s not just your rooms!

And what we didn’t realise, even though Studio Lambert did try and warn us, we didn’t really believe how many phone calls we’d be inundated with from the public after the show was aired. People will also be interested in how you look as a person and what you’re wearing as much as the property, as bizarre as that sounds. People were asking me what ring I was wearing and Cameron was asked where he got his watch from.

I think as well that because they’re faceless, the public feel that they’ve got a right to comment on anything that they see on tv. Be it you, what you’re wearing, your property… We’ve been really lucky that we’ve only had positive feedback, but it’s really opened our eyes. We really did feel overwhelmed… We really did feel invaded for that first week after the show aired. So many emails and phone calls, because people know how to contact you. So you need to be quite… I’m not sure ‘confident’ is the right word, but you need to expect the attention.

Do you have a favourite moment?

Dani: There was one of John’s stories… So we were doing their activity and John was telling us this story called ‘Fancy Pants’ and that was never aired. I’m really sorry because I can’t really remember the story very well, but when he told us this story, it was hilarious.

I really like that when we stayed at Larch Green Lodges we really did feel like we were having a mini holiday of our own. And I’m not just saying that because we’re friends. The weather was incredible and the views were beautiful. It was really, really lovely.

Was it worth it? Did you benefit from appearing on Four in a Bed?

Dani: Definitely. We’ve been very lucky because we’ve only had positive feedback. We can only imagine the negative public interest the game players that are out there get, and the abuse that I imagine they receive…

But we’ve only had really positive, lovely comments from people, so it’s been a pleasant experience, although pretty draining. The amount of emails and phone calls.

But we’ve seen huge benefits. In about 5 days of our particular show being aired, we probably filled a good 10% of our annual occupancy just in those 5 days. And another unexpected benefit was the length of stay has increased. Typically guests would stay with us for one or two nights, but now we’re looking at 3 to 4 nights. So yeah, it’s been really good.

Social media has been busy as well. We already had a pretty strong following on Facebook, but in just over a week, we picked up about another 650 new followers.

Did COVID have an impact on your decision to take part?

Dani: Would we have done it if it wasn’t COVID? Where we are, where we’re situated, bookings are usually really healthy, so we wouldn’t necessarily need the increased exposure.

I think it was the pandemic and us feeling desperate because we found ourselves back in another lockdown.

That’s why we didn’t really hesitate to go on the show, otherwise, we probably wouldn’t have done it to be honest with you. But that said, it was such a hugely positive experience for us, and we would definitely recommend it to others.

Other people have said similarly, that lockdown gave them the time to do it, because otherwise they’d lose out on trading…

Dani: Yeah, and that’s just it, isn’t it? That’s a really good point. We wouldn’t have been able to afford closing our doors for two weeks so we could film. But the pandemic meant we had the time to do it.

Would you ever do something similar to Four in a Bed in the future?

Dani: That’s a difficult one. Because of how tiring it was, and now that we’ve done it, I don’t think we’d look to do anything like it again, but we would highly recommend it. 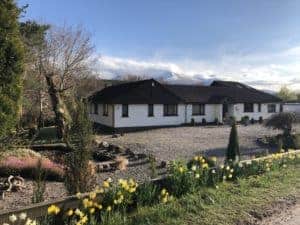 Four in a Bed info:

A popular tea-time show aired on Channel 4, Four in a Bed is a week-long competition taking place over five daily episodes.

Owners of four boutique hotels, B&Bs, holiday lets or glamping sites, try to convince their competitors that their business offers the best value for money.

Each week is a different competition. In the first four episodes of each week, the owners take it in turns to host their opponents. In the final episode of the week, everyone reveals how much they are prepared to pay for the visits to each of the businesses.

It’s a consistently successful show on Channel 4 and first began in 2010.

How do I take part?

Interested in applying to appear on Four in a Bed? Want to showcase your business on TV to the nation?

Apply to appear on the show!

Head to the Studio Lambert website and head to the ‘Take Part’ section.

To apply for a future series of the show, email your full name and name of your hospitality business to:

Mark gave Juliet a glimpse behind the scenes so that you, our readers, can discover the inner workings of the popular tv series.

Find out what the producers look for when reviewing applications submitted by business owners just like you!

Read online for free or check out the April 2020 magazine.

You can also check out the interview with Four in a Bed winners, Gables Pod Camping in our April 2020 magazine, to find out what it’s like to appear on the show.

As operators plan for the restart of indoor trading next month, leading music and technology providers Startle and Rock and Roll Bingo are offering pubs and bars across the country a free month of their popular music quiz to […]

We spoke to the owner of Craigmount B&B to discover how to create a themed bed and breakfast that’s perfect for families. EVERY business has to find their wow factor. Some know what that is […]

Explore the Isle of Skye’s luxurious Monkstadt 1745. We spoke with the owner, James MacQueen, to find out how they utilise Monkstadt’s colourful history to improve their guests’ experience  Tucked away on the beautiful Isle […]