Falling in love with your village inn, buying it and then doing it up to a luxury standard is beyond the dreams of most people. Fortunately for international entrepreneur and businessman Peter de Savary he had already earned his fortune before moving to a Surrey village, where he did just that Bill Lumley talks to him about his combined inn, B&B and luxury glamping facility.

Jet-setting millionaire Peter de Savary has recently announced the completion of the renovation of his local village inn The Merry Harriers in the picturesque village of Hambledon in the Surrey Hills area of outstanding natural beauty.

The inn’s origins date back to the 16th century. The traditional style welcoming village inn is steeped in history, with the landlord’s names dating back to the early 1700s written on the pub walls.

An old hand at identifying the untapped hospitality potential of attractive properties, Peter de Savary moved to the area three years ago.

Immediately he recognised the untapped potential of the inn, its surrounding outbuildings and land and, as luck would have it, the owners of the inn were looking to sell up.

He tells Luxury Bed & Breakfast magazine: “I only live a mile and a half away from the Merry Harrier. I visited it as one does one’s local pub, and it came to my attention that the owners were wanting to sell and move on.”

He says he found the whole idea of the place to be interesting. “It only had three bedrooms, and I could see an opportunity to end up with 15 in total, mixed between some bedrooms in the inn itself, some garden rooms in converted outbuildings, and five shepherds’ huts.

“It seemed to offer a very nice mix of three types of accommodation – something for everybody’s taste. Rather than having a slick pub or inn and trying to make it Sloane Street Knightsbridge in the countryside, I would instead keep it very much as a quintessentially slightly eccentric pub, with really nice and fresh good food and pleasant considerate staff, and make it a pub for everybody. And that is what it is, and I’m happy to say it is very successful, very popular and doing very well.

“As much by accident as design we have hit the sweet spot,” he says. 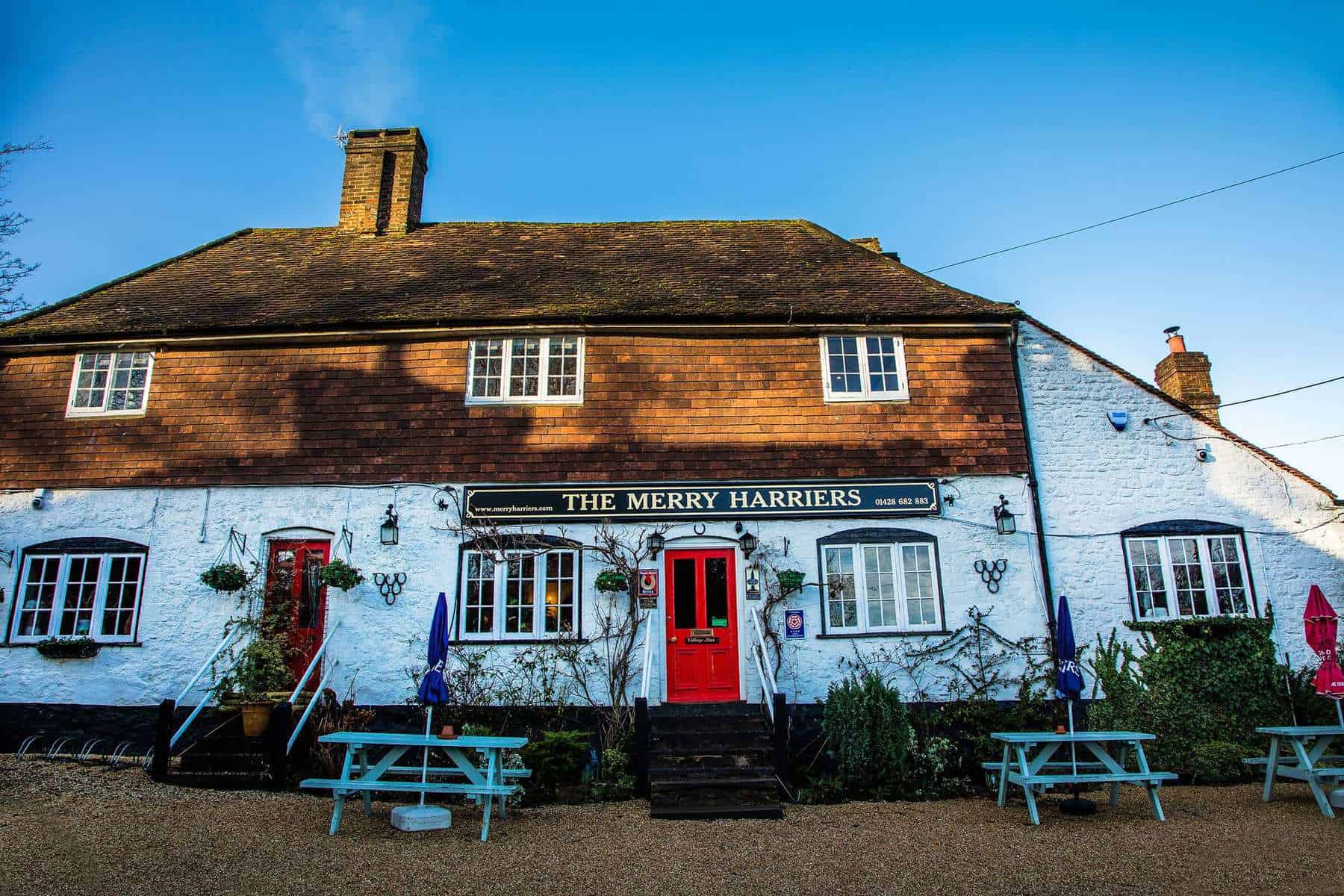 He says he has been attracted to non-city and outdoor properties in the countryside for a very long time where there is scope to enjoy outdoor living, outdoor lifestyle, and with environmentally interesting features. He says: “I have undertaken projects where there is SSSI (site of special scientific interest) land involved and coastal protection. I have always been interested in trying to blend and bring together some form of appropriate activity with something that is environmentally sensitive.”

He stresses that he has never believed that, simply because a property is environmentally important or sensitive or beautiful, it should be “frozen in an ice box” and that nobody should touch it or do anything to it.

“I’ve always thought there is a way to make it more important and more interesting for people by bringing things together in a sensitive and appropriate manner,” he says. “The Merry harriers is an example of what appeals to me: it’s everything you’d expect of a quintessentially English country pub several hundred years old with a number of rooms added, so it’s very much an inn as well as a pub.” 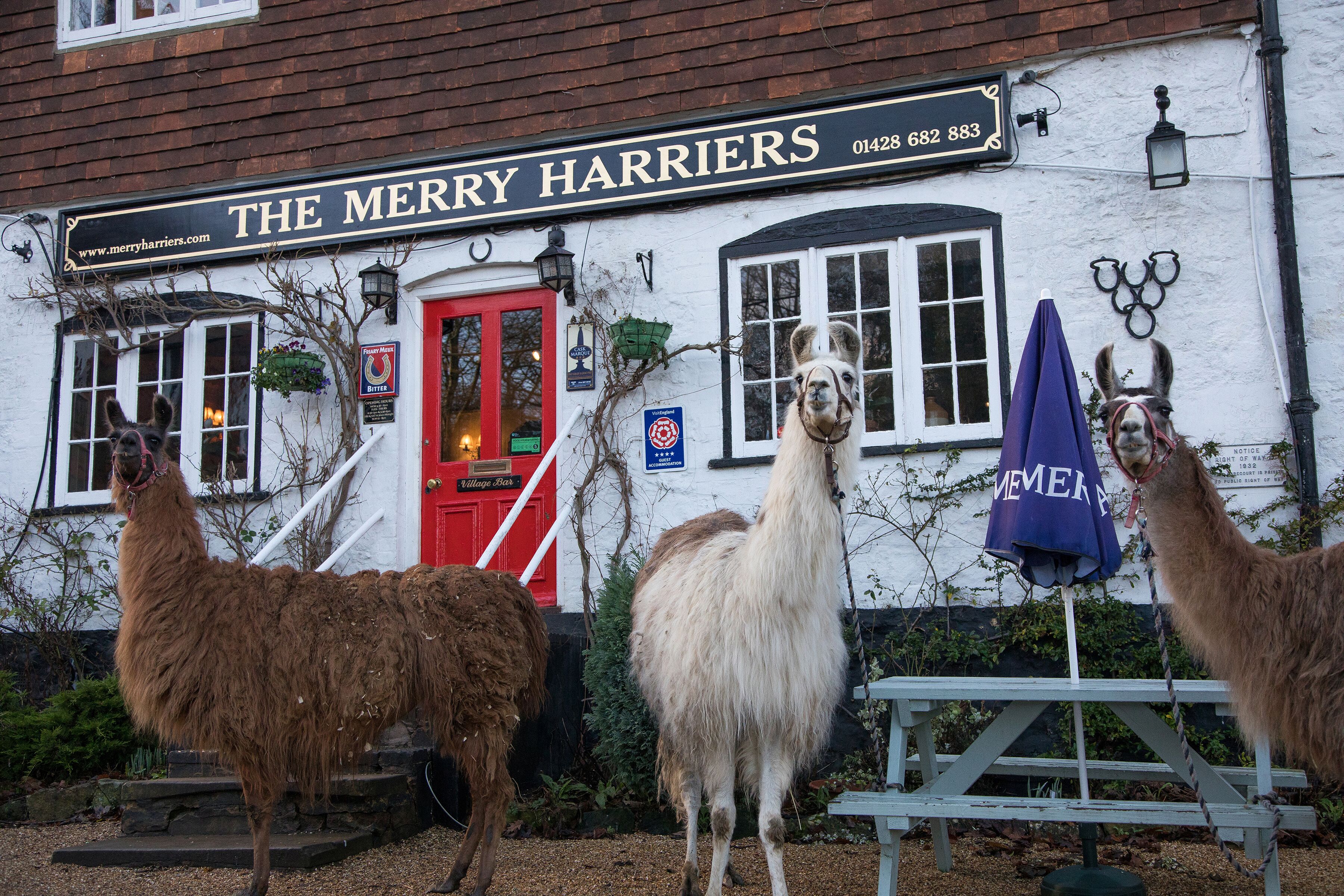 When he bought the inn in 2017, The Merry Harriers was unique in being the UK’s only llama trekking inn. This is a particular feature he was happy to maintain.

“We have found the added dimension of llama-trekking to be hugely interesting and attractive to a wide audience. It’s not just a case of going to stay somewhere or to have a meal in beautiful countryside. Here, you can actually get into bed with the countryside by taking a llama on a three-hour trek and having a picnic in the national park,” he says. Now, with the newly competed shepherd’s huts in the meadow around the pond with lovely country outlooks, he says it is a natural way to broaden the appeal to visitors, and for the business itself to be more successful. “We have taken a traditional concept of a pub and an inn and embraced it more with the countryside.”

Installing shepherds’ huts in the land alongside the inn was a project to enhance the attraction and beauty of the place.

“These particular shepherds’ huts, and the way they are located and positioned and organised, is visually attractive,” he says. “If you are walking or driving past and you see them, you will be impressed at how attractive they are. They bring a sense of adventure to people, whether they have just come out of London or they live in the countryside.

“Rather than staying just in a nice room with all the usual facilities you would expect from a first class establishment you have the adventure of being literally in nature: you are in your shepherd’s hut and it is on its wheels, you have a couple of nice outdoor chairs to sit in, you can light a fire, enjoy the fire pits and the evening air, sit and enjoy the view or watch the sheep in the field opposite or the houses in the field adjoining. You are getting closer to nature when you are in a shepherd’s hut than you would if you were in a bedroom,” he says.

The shepherds’ huts and the garden rooms were only installed in February this year and are newly opened to guests, so everything is brand new, he says. “We’re waiting eagerly for a good and popular summer. The guests we have had so far absolutely love it. If you stay there, it is hard to know what there isn’t to like. You’d have to go a long way and go to a lot of places to find anything that is more pleasant,” he says.

“You may not want to live in a shepherds’ hut for the rest of your life, but for two or three nights as a getaway it’s a bit of an adventure – and let’s be honest, you’re not exactly roughing it.”

Indeed these particular shepherds’ huts have under-floor heating, they are fully insulated, they have a log-heated stove, they have a bathroom probably as nice as most people’s bathroom at home, they have a great bed, a work bar arrangement and a fridge, and they have views to die for.

He says: “Guests can sit outside, light their fire pit, walk over to the inn and have a nice hearty breakfast or a nice lunch or dinner. It’s a pretty good little adventure, it appeals to people of all ages, and it is great for taking a family.”

For more stories, features and competitions, Sign up to the free LB&B / Innkeeper newsletter

Shortlist announced for the eviivo awards 2019

The shortlist for the 2019 eviivo Awards has been announced, with 110 independent accommodation providers from across the country shortlisted as finalists. The eviivo Awards are now in their sixth year and single out the best of the UK’s world-class B&Bs, small hotels, guest houses, inns, serviced apartments and self-catering units. […]