Regal luxury in the centre of Bath

The quiet season for many readers may be coming to an end, but for many properties in urban areas that attract large numbers of international visitors, business can offer more of a year-round flow of guests.
One such place is the ancient Roman city of Bath, which hosts close to half a million international visitors every year. Katherine Dewhurst runs Abbey Rise, an elegant luxury Victorian terrace B&B close to the centre of Bath. She lives in the property with her son and offers three ensuite B&B guestrooms.

Katherine bought the business 21 years ago, when her son was just six months old. “I had always worked in hospitality and hotel management,” she explains. In fact her background in high-end hospitality could hardly be more refined: for two years she was deputy chief housekeeper at Buckingham Palace, she has worked for a number of years managing a country house hotel, and prior to that, after leaving university, she worked for the United Nations in Geneva for a year.

“A lot of clients there were heads of state, so I became used to security and protocol in that kind of environment,” she recalls.

Her time at the Royal Household followed a couple of years working for Luxury Hotel Group, which itself followed a period working for InterContinental Hotels Group.
The soul of discretion, despite presumably having many insightful and fascinating memories of her work at the palace, Katherine will not be drawn on the experience in any detail, saying simply: “I have momentos from my time working at the palace. It was an experience in itself.” In fact, she lived there in her own flat within Buckingham Palace. “The job has to be publicly advertised as it is a public job,” she explains. “I saw this advertised in The Caterer and Hotel Keeper, and I applied for it at a time when I was head housekeeper at a country house hotel.” She adds: “I was 26 at the time, which was quite young for the job in question.”

Today, as well as running the B&B business, she says she often rents the whole house as a self-contained house let, usually over weekends. “It involves a lot more work as we have to get the whole house ready – a lot of my friends think it is easy work but it’s not! It really takes a lot more time to get ready,” she stresses.

Unusually for a B&B operation, she also rents out the whole house for large single bookings, on which occasions she and her son move out for the duration. The time split between B&B and letting out the whole house varies, she says, although she tends to take more B&B bookings than house bookings. “Funnily enough I had a lot of bookings of the whole house in January, which is unusual,” she says. “We live in the house – it’s our home – but when the house is rented, we move out and they move in.”

Katherine is especially proud of two particular aspects of her property: the original artwork on display in the house, and the breakfast that she serves to her B&B guests. “For breakfast I use only high-end quality food – locally sourced and organic wherever possible, such as organic yoghurts.”

She adds: “In addition to full English we offer specials such as avocado and poached egg or vegan options – it’s not just ‘greasy spoon’!”

Rather than the somewhat impersonal nature of many B&B breakfast areas where guests typically have a table to themselves, she seats her guests all together at a French refectory oak table. And rather than this causing apprehension among guests, it actually gets them to open up, she says. “They swap stories, and this is conducive to conversation, especially as we have a lot of international guests,” she says. “They like that aspect of the stay, and hearing from each other where to eat or visit.”

“I think sometimes people are a bit intimidated by the idea of a communal breakfast area, but more by the thought of it rather than reality. I feel I have enough experience to host the breakfast to make it chatty, and I can always get them started on something. It’s not difficult to get the conversation going for example if there are a bit quiet and people just relax,” she says.

In fact, meeting and getting to know her guests is what she says she still enjoys most about her business. “Even after 20 years of hosting the B&B, I still enjoy love meeting and talking to all sorts of people,” she says.

Elaborating on the nature of her sizeable market for overseas guests she adds: “I have a big German market as I am in a German guidebook, which is praise indeed! We also get a lot of American guests,” she adds.

To add to her homely USP she says she makes homemade cake, biscuits or brownies, which she puts under a cloche on the first floor. “The guests can help themselves, and they have coffee machines in their bedrooms.”

Endorsing the notion that Abbey Rise provides an attractive proposition for visiting guests in the competitive environment of Bath is the fact that the B&B welcomes a significant proportion of of repeat guests. “I have some that have been coming for 16 years,” she says.

Katherine has diversified her offering and bookings as new technologies have emerged. For example she set up a WhatsApp group 18 months ago with five other women who run B&Bs. “We have all been going a long time and we meet once a month,” she says. “Rather than sending people back to the OTAs we refer to each other as we are all about the same price mark and offer the same standard, so if someone emails or phones me directly and I can’t accommodate them I’ll ask one of the girls on my WhatsApp group and ask if any of them have any rooms available on the dates when I am full. That’s also very personable.”

The property has been a member of Airbnb for five years from where Katherine says she takes a lot of business, but she says: “The problem with Airbnb for me is a) a lot of the properties aren’t regulated and there is no standard – they can be excellent or absolutely terrible. For a lot of people it is simply a second business from which to make a bit of money on the side, and therefore they are not totally passionate about it. If you are living and working and running a B&B it is different. You can’t stay in that mode if you aren’t really enjoying it – it really begins to show,” she adds.

She says one major difference between B&B guests and Airbnb guests is that B&B guests encounter a very personable experience, but she says: “With a lot of Airbnb people, you get a key safe and you don’t see anyone and it’s very impersonal. People think it’s very personable but a lot of the time it’s not. For a lot people  it is just a second business and they haven’t ever actually trained or worked in the industry before and, I think it comes to a point where people want to know about you, about your experience – they6’re obviously intrigued about working at the royal palace, for instance.”

“You don’t get to see your Airbnb guests. A lot of B&B people want to know where you recommend to go out to eat and places to visit and sights to see – it’s all those things: they’re not just buying a bedroom and a breakfast -they are buying a bit of you really. And I think that’s the difference.”

The house is also advertised in a book Group Accommodation and I rent it individually – they get a better rate if they come to me direct.

Another major selling point of the property is that it offers its own car park that can take up to five vehicles. “Anyone who has ever tried to park in Bath will recognise the value of this,” she says. “It’s less than 10 minutes’ walk to the city centre. We don’t charge any extra for parking. Many high-end hotels in Bath don’t even offer their own car parks. People who know Bath know that is a huge issue, and it is a big reason we are usually pretty busy,” she concludes. 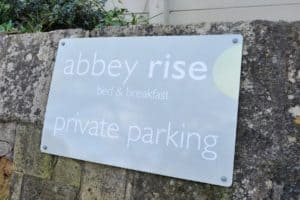 October 24, 2019 Oliver Mizen free access Comments Off on Don’t Buy Furniture For Your B&B Until You Read This

What B&B Owners Must Consider Before Buying Brand New Furniture   Choosing what bedroom furniture to buy for your guesthouse or B&B should be a very important decision. Furniture has the power to change a […]

Bobbling and pilling in bed linen

Everything you do for your establishment has your guest’s happiness in mind. That’s why it can be so frustrating when something you buy doesn’t last as long as you may expect it to. Bobbling or […]