This year’s Six Nations Championship kicks off on 1st February, marking the end of Dry January and attracting hordes of sports fans into pubs and bars across the country.
Since 2013, the global rugby fan base has increased by 24% and a whopping 4.8million consumers visited the on-trade specifically for the Six Nations last year.

41% of consumers drink alcohol every time or almost every time they attend a domestic rugby match, while 51% do so for international matches.
With these consumers identifying quality of serve, drinks range and live sport as key elements for having a good experience in an outlet, it’s important to create a strong all-round offering to drive them into staying longer and spending more.

Read on for tips to capitalise on the Six Nations from Jerry Shedden, Category & Trade Marketing Director at HEINEKEN UK.

Tackle your drinks range and encourage trade up

Despite 76% of consumers looking for value for money, rugby fans are 22% more likely to upgrade their drink and spend £40 more during the Six Nations than on any average drinking occasion. Tempt them into trading up to more premium drinks, such as Birra Moretti, Amstel or Old Mout – but don’t forget that classic beer and cider brands like Foster’s, Strongbow and John Smith’s still have their place on the bar, making up more than half of the total on trade volume.

While beer and, in particular, stout are synonymous with rugby fans, 53% of consumers drink wine (especially red) in the on-trade during the Six Nations, and Champagne also proves popular.
Use wine displays or chalkboards to showcase your offering, place more premium red wines at eye-level on the back bar and encourage staff to make recommendations.

Signpost your no and low options, such as Heineken 0.0 – the number one no and low alcohol brand in volume and value and still the fastest growing – for any fans keen to soak up the atmosphere, but without the alcohol.

BLADE is the first-ever dispense solution that allows consumers to engage in non-alcoholic draught beer – a lucrative investment given 93% of consumers prefer draught to bottled beer. Pubs stocking Heineken 0.0 in both packaged format and on BLADE showed an 82% uplift in sales, when compared to those serving just packaged.

From Johnny Sexton’s last-second drop goal in 2018, snatching Ireland a 15-13 win against France, to Elliot Daly’s 75th minute try in 2017, sadly breaking Welsh hearts but securing the ultimate win for England, timing is indeed everything. 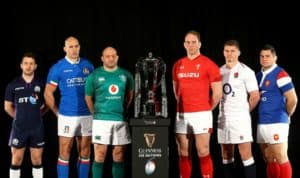 Last year, rate of sale increased by 3.7% over the weekends when matches were showing, with Six Nations’ fans most likely to visit the on-trade for drink-led occasions on Saturdays. Beer drove a volume uplift of 5.3% – boosted by stout, yet lager had the highest proportion of drinkers (69.1%), followed by ale (21.1%)  reinforcing the important role of mainstream brands like Foster’s and John Smith’s. With an average total value uplift of 1.6% at the weekend, operators could see an extra £1,405 in the till over the championship!

On-trade visits over-index later in the day with 80% of consumers visiting early evening (5-8pm), coinciding not only with match time but with the ‘after-match’ occasion. Sports fans arrive up to 2.5 hours before kick-off and tend to stay at the pub afterwards – no matter what the result, so there’s an opportunity to boost sales beyond those 80 minutes of play. Consider implementing ‘burger and drink’ style food promotions, multi-buys or cross-category deals to increase weight of purchase.

Outlets see the highest uplift when home nations play each other at the weekend. Thanks to the England vs. Wales match in 2019, rate of sale increased by 45% versus an average weekend. Familiarise yourself with the fixtures and plan accordingly! 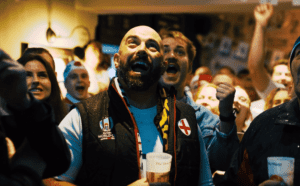 Unsurprisingly, 51% of consumers are looking for a great atmosphere during a Six Nations weekend, an increase of 12% on an average non-match weekend. It’s important to consider your all-round offering. Consider setting up several screens with plenty of seating, a pre-booking service so punters can guarantee a good spot and half time food and drink deals or pre-orders, to provide a great experience that will drive engagement and repeat purchase. In fact, more than one third of rugby fans say they would be willing to pay a deposit of £16+ per head to pre-book a table and guarantee a good seat for the match.

In 2019, HEINEKEN UK Star Pubs & Bars receiving Six Nations visibility kits sold an additional 102 serves over the two-month period – half of which were beer – versus those without the kits. The extra visibility meant stout and keg ale (both featured on the kits) saw a 6.6% and 4.5% uplift in volume sales respectively in those outlets. Make sure to shout about the fact that you are showing the matches – both outside and inside your pub – before and during the match to drive footfall and sales. Why not encourage your staff to wear rugby shirts too?

As Wales enters the tournament as defending champions, could this be another year for a Grand Slam? Here’s hoping it’s a home nation victory!

Leading trade supplier, Portfolio Home introduces new remits of texture, style and colour for boutique hotels, B&B’s and other staycation escapes Guest bed linen is an essential element that needs to be considered for any […]

Cancellation policies “up in the air”

April 20, 2020 Dominic Johnson Luxury BnB News Comments Off on Cancellation policies “up in the air”

The government is under growing pressure to take steps to address new anti-competitive practices adopted by OTAs after the warnings were issued against travel in the UK. As this issue went to press the hospitality […]