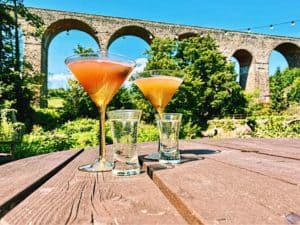 The Rising Sun in Pensford, to the south of Bristol, has been named the overall winner in Union JACK radio’s nationwide search to find ‘Britain’s Best Beer Garden’.

The pub was originally nominated when the competition launched earlier this month, going on to reach the final top ten* amongst some impressive competitors.

The overall winner was decided by a public vote, with over 2,000 votes cast in less than a week; The Rising Sun can today be named a very worthy winner, receiving almost a fifth of the overall vote (18%).

As well as receiving the title, The Rising Sun will also host a day of live radio broadcasts tomorrow (Tuesday 1 September), when national radio station Union JACK will air some of its flagship shows from its stunning pub garden. This will include the hugely popular Not-in-a-Pub Pub Quiz, hosted by none other than the nation’s best quizzer, Mark “The Beast” Labbett.

The Rising Sun in Pensford is owned by St Austell Brewery and is well known for its idyllic setting, boasting a large, riverside garden, nestled at the foot of Pensford Viaduct by the River Chew. Landlord Lisa Faulkner said of the victory: “Us as the Team Rising Sun feel honoured to be chosen as the winner of Union JACK radio’s Best Beer Garden competition, and thank everyone who took the time to vote for us. The garden itself is spoilt by the most amazing views and the backdrop of the viaduct and weir, currently serviced by an outdoor bar ensuring that all social distancing rules can be adhered to.”

Giles Gear, Programme Manager of Union JACK radio, said: “I am over the moon for The Rising Sun – to be crowned ‘Britain’s Best Beer Garden’ is a monumental achievement, especially given that this was the public’s decision. The competition was incredibly tight, particularly between the top three, so all of the shortlisted pubs should feel incredibly proud of themselves. The Union JACK family is excited to head to The Rising Sun’s beer garden tomorrow for a day of celebrations and on-air fun!” 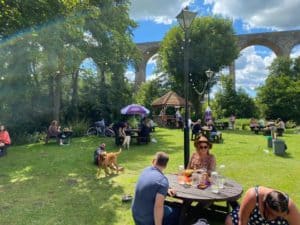 Musically, every song is picked by listeners via the Union JACK app, with over 20 million song votes cast to date. In the comedy world, Union JACK is making a name for itself with a range unconventional and creative programmes, including collaborations with the likes of Brian Blessed OBE, Shappi Khorsandi, Basil Brush, Leicester Comedy Festival and Edinburgh Festival Fringe.

·       The Cross Guns in Avoncliffe, Bradford-on-Avon

·       The Boathouse, in Shrewsbury, Shropshire

The perfect place for two people to enjoy a sauna, BYOB pub and sustainable vegetable garden. Glen Dye, the UK’s most understated new staycation hideaway, has announced a slew of incredible new additions to its […]

This is a pay-what-you-feel-its-worth webinar.    This is a quick reminder from Skift to join us at our Loyalty Online Summit tomorrow at 11 a.m. EDT as we discuss how customer loyalty program experts are […]