The Wine & Spirit Trade Association (WSTA) has called on the Treasury to cut wine and spirit duty in the upcoming budget and help boost the public purse, in a budget submission sent to the Treasury this week.

It says by delivering a freeze to wine and spirits in 2017 the Treasury landed a bumper tax windfall and at the same time helped cash strapped consumers and gave a boost to British businesses. But it says the respite was short lived. In 2018 the Chancellor chose to once again freeze spirit duty but singled out wine for an unfair duty rise.

According to the Government’s recent Alcohol Duty Bulletin, in the last six months since the wine duty hike there has been a slump in wine sales leading to a 2.1% drop in revenue to the Exchequer – falling to £2.4 billion down from just over £2.5 billion. If the same rate of decline continues forecasts show the Treasury will lose £93 million in 2019 compared to 2018.

For beer and spirits, both of which received a duty freeze at the last Budget, the revenue income was more positive with beer up 2.4% and sprits up 1.7%. 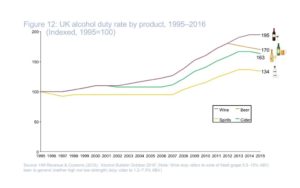 WSTA CEO Miles Beale said: “Duty rises are bad for consumers, bad for business and bad for the Exchequer, as the Government’s own figures clearly show. After wine was singled out for a duty rise wine revenues have fallen on the previous year, in line with a slump in wine sales.

“We recognise the fact that alcohol duty is an important revenue stream for Government to fund public services, which is precisely why we are calling for a 2% duty cut on wine and spirits. A cut will not only boost Treasury coffers but also bring a boost post-Brexit to British businesses and consumers, whereas another rise will have a negative impact on all three.

“If Government chooses to increase what are already some of the world’s highest alcohol tax rates, it will not only push up prices for people who voted them in but also hit hard an industry that prides itself in flying the flag for brand Britain.

“We agree it’s time for government to change the UK’s unfair, outdated and restrictive wine and spirit duty regime. However, the Chancellor should pre-empt reform with a duty cut.”

British drinkers currently pay 68% of all wine duties collected by all 28 EU member states and 27% of all spirits duties. This is by far the most of any member state despite accounting for only 11% of the total EU population.

The WSTA is calling on its members and the public to lobby MP’s to highlight the UK’s grossly unfair alcohol taxation policy.

See the February issue of Luxury Bed & Breakfast magazine for a feature on UK wine tourism.

Comfort And Care The Key To Keep Inn Guests Happy   With so many styles and comfort levels to choose from it’s important innkeepers select the right bed for their customer, after all, a comfortable […]

Spilling the beans on the secret to guest satisfaction

May 28, 2019 Dominic Johnson free access, Luxury BnB News Comments Off on Spilling the beans on the secret to guest satisfaction

Good coffee is more important than good pillows when it comes to the perfect bed and breakfast experience, Nestlé Professional® has discovered Through its survey of people who have stayed in a bed & breakfast […]

Multi-generational holidays are growing in popularity allowing extended families to spend time together, according to a survey published this month, which found that 15% of UK travellers now go on holiday in multi-generational family groups. […]